History of Adoption in Australia

Lorem Ipsum is simply dummy text of the printing and typesetting industry. Lorem Ipsum has been the industry’s standard dummy text ever since the 1500s, when an unknown printer took a galley of type and scrambled it to

There are many variations of passages of Lorem Ipsum available, but the majority have suffered alteration in some form, by injected humour, or randomised words which don’t look even slightly believable. If you are going to use a passage of Lorem Ipsum, you need to be sure there isn’t anything embarrassing hidden in the middle of text. All the Lorem Ipsum generators on the Internet tend to repeat predefined chunks as necessary, making this the first true generator on the Internet. It uses a dictionary of over 200 Latin words, combined with a handful of model sentence structures, to generate Lorem Ipsum which looks reasonable. The generated Lorem Ipsum is therefore always free from repetition, injected

It is a long established fact that a reader will be distracted by the readable content of a page when looking at its layout. The point of using Lorem Ipsum is that it has a more-or-less normal distribution of letters, as opposed to using ‘Content here

This is the date that the then Prime Minister Julia Gillard offered a national apology on behalf of the Australian Government to those affected by former forced adoption policies and practices in Australia. 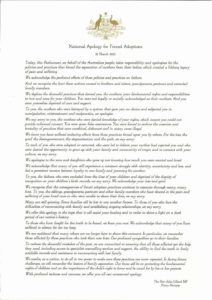 The national apology was delivered in the Great Hall of Parliament House, Canberra.

A national inquiry referred by the Senate to the Community Affairs References Committee in late 2010 resulted in the Committee’s report in 2012 which included 20 recommendations on how to respond to the findings of the inquiry. Amongst the recommendations was the delivery of the national apology.

Recommendation 6
9.81      The committee recommends that formal apologies should always be accompanied by undertakings to take concrete actions that offer appropriate redress for past mistakes.

Recommendation 8
10.58      The committee recommends that the Commonwealth, states and territories urgently determine a process to establish affordable and regionally available specialised professional support and counselling services to address the specific needs of those affected by former forced adoption policies and practices.

Recommendation 9
10.59      The committee recommends that the Commonwealth fund peer-support groups that assist people affected by former forced adoption policies and practices to deliver services in the areas of:

And that this funding be provided according to transparent application criteria.

Recommendation 10
10.60      The committee recommends that financial contributions be sought from state and territory governments, institutions, and organisations that were involved in the practice of placing children of single mothers for adoption to support the funding of services described in the previous two recommendations.

Recommendation 11
11.36      The committee recommends that the Commonwealth should lead discussions with states and territories to consider the issues surrounding the establishment and funding of financial reparation schemes.

Recommendation 12
11.43      The committee recommends that institutions and governments that had responsibility for adoption activities in the period from the 1950s to the 1970s establish grievance mechanisms that will allow the hearing of complaints and, where evidence is established of wrongdoing, ensure redress is available. Accessing grievance mechanisms should not be conditional on waiving any right to legal action.

Many of these recommendations are yet to be acted upon by either the Commonwealth or State Governments.

All of the State and Territory Governments in Australia, with the exception of Northern Territory, have offered apologies for past adoption policies and practices that occurred in their jurisdictions.

Click on the links below for the relevant information:

The ACT Chief Minister Katy Gallagher presented a formal apology to people who have been affected by past forced adoption practices in Australia from the late 1940s through to the 1980s on the 14th August 2012 at the ACT Legislative Assembly in Canberra. The apology by the ACT Government acknowledged that commonwealth policies significantly affected people within the Canberra community. 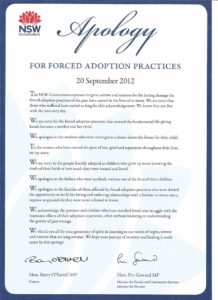 The following Apology for Forced Adoption Practices was adopted by both Houses of the Parliament of New South Wales on Thursday, 20 September 2012:

* This House acknowledges the traumatic effects of the forced adoption practices of the past that have echoed through the lives of tens of thousands of mothers, fathers, people adopted as children and their families; and

* All Members of this House, with profound sadness and remorse, say to those living with the ongoing grief and pain of forced adoption practices, that we are sorry. 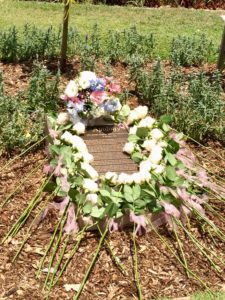 On 27 November 2012, the Premier, the Honourable Campbell Newman MP, made an historic apology for past forced adoption policies and practices in Parliament, on behalf of the Queensland Legislative Assembly.

During its deliberations, the Committee held a public hearing in Brisbane in April 2011 and heard evidence from individuals and stakeholder groups about the impacts of forced adoption practices of the past. The inquiry heard the very real, and for many, lifetime consequences that resulted from forced adoption policies and practices in Queensland, particularly for mothers and their children. 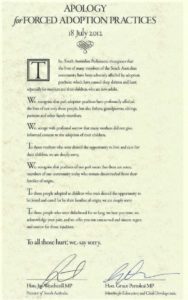 On behalf of the South Australian Government, the Premier, the Hon. Jay Weatherill, MP, delivered a formal apology to mothers and fathers whose children were removed because of forced adoption practices from the past, and to people who were separated from their families of origin as a result of those practices.

The apology was delivered at the South Australian Parliament on Wednesday 18 July 2012. 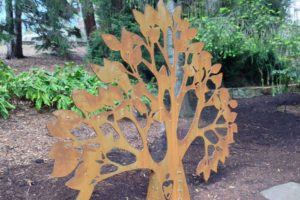 Tasmania has taken a historic step towards healing past injustices by delivering a formal apology to mothers, fathers and their children, who are now adults, hurt by the past practice of forced adoptions. The apology was given on behalf of the Tasmanian community in Parliament on 18 October 2012. Parliamentarians acknowledged that forced adoptions were immoral and illegal, and offered the community’s unreserved and sincere apology to those affected. 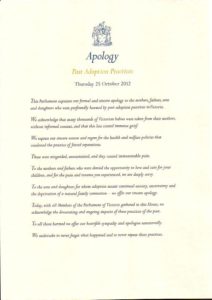 On 25 October 2012 at 11.30 am, the Premier of Victoria, Ted Baillieu, Opposition leader Daniel Andrews and Nationals leader Peter Ryan addressed a joint sitting of the Victorian Parliament to apologise officially to all those who were affected by the forced adoption practices in the state between the 1950s and the 1970s.

The Apology was an outcome of the Federal Senate Inquiry into forced adoption practices, which found that up to 250,000 babies were forcibly removed from their predominantly young mothers. 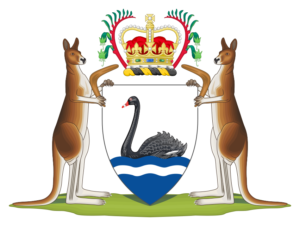 The Parliament of Western Australia formally apologised for the ‘Removal of Children from Unmarried Mothers’ in 2010. It was the first Australian parliament to do so. The Parliament, on behalf of previous governments, apologised to ‘the mothers, their children and the families who were adversely affected by these past adoption practices’.

The apology was heard by a large number of those mothers and families in the public gallery.

The items in the collection were gathered from individuals who courageously shared their personal stories – their words, photographs, documents and their voices.  Acknowledging the truth of their experiences validates and vindicates those who were silenced for so long.

The collection can be accessed via the National Archives website and at the Without Consent Exhibition.

“The project cannot right the wrongs of the past. Rather, it seeks to explain to the community what happened and to acknowledge those who suffered, so that – in the words of the apology – ‘these practices are never repeated’.
` Professor the Honourable Nahum Mushin”

National Research Study on the Service Response to Past Adoption Practices 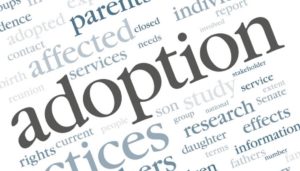 The Australian Institute of Family Studies’ report Past Adoption Experiences details the effects of forced adoptions. This report was published on 17 August 2012.

The full report can be accessed HERE.