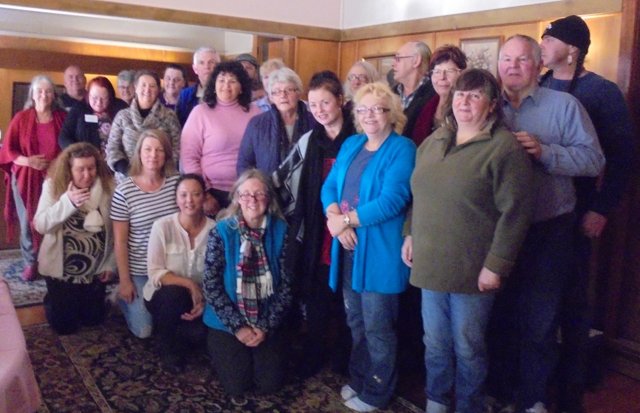 Quarter of a Million Reasons

Legalised adoption has existed in Australia for nearly one hundred years. In that time well over a quarter of a million Australian children had their identities extinguished and lives changed forever through adoption. Many of those adoptions were forced, some were illegal, nearly all removed children from meaningful contact with or knowledge about their real families. Some experienced childhoods full of abuse and trauma and even many of those from normal adoptive homes suffered from maternal separation, identity confusion and other health impacts.

These adopted people have never had a national voice.

Adoptee Rights Australia (ARA) was founded in mid-2018 by members from grass roots groups and activists fighting for the rights of present and future adoptees. This is ARA’s story.

Voices in the Wilderness

Adoption has been legally ‘closed’ for much of its history in Australia. Early mother and adoptee activists found themselves often ostracised and silenced amid social stigma against mentioning adoption, let alone challenging its assumed good. However, social changes in other areas such as discrimination and disability gave adoptee activists a supportive context in which to raise the issue of adoption.

The shift from closed adoption to the so-called ‘open adoption’ from the 1980’s onwards was a significant turning point. By the mid-2000s the Facebook page of the Australian Adoptee Rights Action Group (AARAG) was the largest of a growing number of groups where adoptees and others met, discussed and organised. A recurring complaint was that adoptees were being left out of adoption reform, and out of media’s coverage of the growing social debate.

In areas such as disability and mental illness the voice of those with lived experience of discrimination and trauma were strong and growing. Across Australia a ‘rights-based’ approach was transforming social policy to empower people rather than institutions and governments.  However, adopted people remained consistently ignored. They were often silenced and mis-represented as angry adults stuck in the past, out of touch with the benefits of adoption that the happy reunion stories in the media regularly reinforced. At the same time the influence of large organisations from the adoption industry and interest-groups of infertile people wanting to adopt were growing.

A watershed moment occurred in 2013 with the National Apology on forced adoption. This came about largely from the advocacy of mothers-of-loss, but the apology had a galvanising effect on many adoptee activists.  For many it symbolised the lack of recognition that adopted people were given and it marked the beginning of a new stage in the fight for adoption reform. They recognised the lack of a national body meant the voices of adoptees were unlikely to be heard in the growing debate about adoption reform. Pro-adopter organisations such as AdoptChange had the ears of Government and policy makers, leveraging celebrities and large financial resources to argue for a new era of easier and quicker adoption.

Around the time of the National Apology an adoptee leader, Thomas Graham from Canberra, proposed an adoptee run national body – to widespread grass roots support. The seed was planted, but struggled to germinate. Interestingly, national associations for inter-country adoptee groups were successfully representing the voices of the hundreds of Australians adopted as children from countries like South Korea and Vietnam. However, an association for the hundreds of thousands of Australian adoptees still appeared out of reach.

In early 2016 a handful of adoptee activists from around Australia travelled to NSW to support AARAG leader Dr Catherine Lynch speak on “An Adopted Persons’ Perspective” at a symposium on adoption. Witnessing a fellow leader stand up to advocate for adoptees and then meeting together afterwards face-to-face had a powerful effect on these activists. Out of this almost accidental encounter some went on to initiate a key event that lead directly to the formation of ARA as Australia’s only national adoptee-controlled association.

A National Round Table of Adoptee Activists

William Hammersley and Sharyn White (leading activists from Victoria and South Australia respectively) began discussing a national conference of adopted people, but the size of the task soon led them to the more manageable idea of a national Adoptees Round Table Think Tank.  The concept was to gather adoptee activists from around Australia to identify key strategies needed to progress the cause of adoptee rights. William gained support through the AARAG Facebook group and began work on the Think Tank.

Victorian adoptees and AARAG members, Ellena Biggs and Isabell Collins worked with William Hammersley to run the Think Tank in Warburton, Victoria.  After an initial auspice arrangement fell through, an executive with a local community health organisation, Michael McMahon (coincidentally an adoptee himself), provided auspice for funding under the Federal Governments Forced Adoption Small Grants program, administered by Relationships Australia, Victoria. Donations in kind were received from local adoptees and supporters. Dr Sara Murphy, a member of the Australian Psychological Society, with an extensive background in attachment theory was engaged as facilitator.

The Adoptees Round Table Think Tank was held on 2nd to 4th June 2017 and is the first known national face-to-face meeting of adoptee activists held in Australia. A total of 25 adoptees from Victoria, New South Wales, Queensland, South Australia and the ACT met to discuss the issues facing adoptee rights.  Dr Catherine Lynch joined the Think Tank via video link for the crucial final session which resulted in the unanimous decision to register a national association of and for Australian adoptees.  A working group was established and the initial name of Change Adoption Australia (CAA) was agreed. The seed had finally sprouted.

The working group quickly set up a Facebook page for attendees of the Think Tank, later expanding it to include those who due to personal circumstances were unable to attend. Important early work was done on securing naming rights and submitting initial funding applications, however the original working group gradually lost members and disbanded. A new working group was formed of Judy Glover, Sharyn White and Michael McMahon, supported administratively by William Hammersley, and a draft constitution was soon approved by the Facebook members. Under the guidance of the new working group the inaugural Management Committee was elected in late 2017, being:

Significantly, a number of large donations were made by two members of the Facebook group. A grant towards the costs of establishing and registering the association was also received – once again from the Federal government’s Forced Adoption Small Grants program, but through Relationships Australia NSW, and this time auspiced by the not for profit organisation Fulcrum Aid Ltd.

On Sunday 6th May 2018, at 7pm AEST, the Committee took over from the working group. Two of their most significant early decisions were to change the name of the association to Adoptee Rights Australia (ARA) to better reflect the objectives of the association, and, to invite William Hammersley to support the Committee in the ongoing voluntary role of Liaison Officer. Incorporation for Adoptee Rights Australia, the national advocacy association of adopted people, was granted from the Department of Fair Trading NSW on the 17th August 2018.

Turning Our History into a Better Future for All

ARA’s Committee is now well advanced in key aspects of establishing the systems and strategies that will enable ARA to meet its objectives. This website has been constructed, a membership drive is underway and the financial and governance needs of the association are being addressed to ensure stability, democracy and effectiveness. At the heart of ARA’s mission is the advocacy for the rights of and services to all adopted people. The lived experience of adoptees is understood as crucial to informing change to adoption practices so that a better future can be achieved for current and future adoptees. ARA’s approach is rights-based, seeking to have policy and decision makers commit to the rights of children being first in all adoption reform. The preamble of ARA’s constitution states:

Adoptee Rights Australia is established by adopted persons to give a national voice to their lived experience of adoption in Australia.

Adoptee Rights Australia aims to be the peak body to advocate for reform in adoption legislation, policy and services in all Governments jurisdictions in Australia so that the human rights and wellbeing of adopted persons are restored, protected and promoted

Adoptee Rights Australia seeks to raise public awareness of, and support for, reform of adoption legislation, policy, and services across Australia.